skip to main | skip to sidebar

Three men were in a NASA conference room to decide how to spend $10 billion.  “I think we should put our men on Mars!” said the first man.


Some people can tell what time it is by looking at the sun. But I have never been able to make out the numbers.


Did you hear about the fellow that stayed up all night to see where the sun went?  It finally dawned on him.


Living on Earth may be expensive, but it includes a free trip around the Sun every year.

Bob: You have a nice view out this window. How far can you see on a clear day?
Tim: 93 Million miles...From here to the Sun.
The New York Times, among other papers, recently published a new Hubble photograph of distant galaxies colliding. Of course, astronomers have had pictures of colliding galaxies for quite some time now, but with the vastly improved resolution provided by the Hubble Space Telescope, you can actually see lawyers rushing to the scene...
It is not conclusive yet, but the NASA believes the Mars Pathfinder has found proof of life on Mars. The CD player was stolen.

What kind of star wears sunglasses? A movie star.
How did the astronaut serve drinks? In sun glasses.
A Russian, an American, and a Blonde were talking one day.
The Russian said, 'We were the first in space!"
The American said, "We were the first on the moon!"
The Blonde said, "So what? We're going to be the first on the sun!"
The Russian and the American looked at each other and shook their heads.
"You can't land on the sun, you idiot! You'll burn up!" said the Russian.

To which the Blonde replied, "We're not stupid, you know. We're going at night!"

What do you get when a dog walks across the sun? A hot dog!
Weather Experiments

NEVER look directly at the sun.  You need the right equipment and professional filters.

Use sunglasses and sunscreen when you go outside.

Drink water when you're sweating.

Take breaks, get some shade.

The safe way to see the sun is NASA's SOHO Pictures. 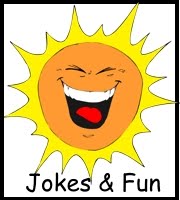